I've had a few electronics kits kicking around for years now that I'd never sat down and put together.  At a glance, these kits all seemed like they were designed to be soldering practice that resulted in a fun gadget at the end of the day.  All the magical functionality always was always hidden in black-box integrated circuits, so I could never figure out exactly how the circuit worked, and this frustration (combined with my poor soldering abilities) left me without much desire to do much with them.

Very recently though, it occurred to me that we now live in an age where the datasheets for many of these black-box chips are online, and it's now actually possible to pull back the curtain on what they're doing under the hood.  As it turns out, most of them are a lot simpler than I would have guessed.  And after digging through my old kits, I also realized that they are often just simple IC components that are connected in clever ways to achieve their perform their magic.

With this epiphany and newfound confidence understanding how these kits work, I set out to learn something new about electronics.  And given that my background in electronics has been limited to a week of electronics camp at age 13 and an 8 AM physics class in college, I figured my odds at accomplishing this were pretty good.

This endeavor started with a Spinning LED Wheel kit by a Belgian company called Velleman.  It's a simple LED roulette wheel circuit where, upon pressing a button, a light spins around a ring of ten LEDs very quickly at first, then slows and eventually stops on a single "winning" LED.  The kit comes with a couple resistors, capacitors, LEDs, and two DIP chips, and is really inexpensive. 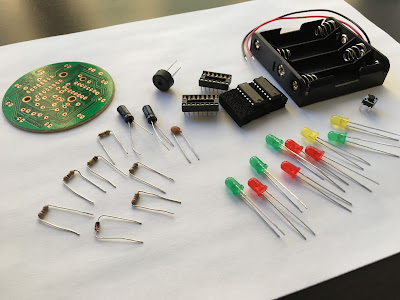 It also comes with a printed circuit board and battery pack which are supposed to be all soldered together, but I wanted to assemble this all on a breadboard for a couple of reasons:
So, with a trusty $3 breadboard and a handful of jumper wires, I set out to reproduce the circuit diagram that ships with the Velleman MK152 kit: 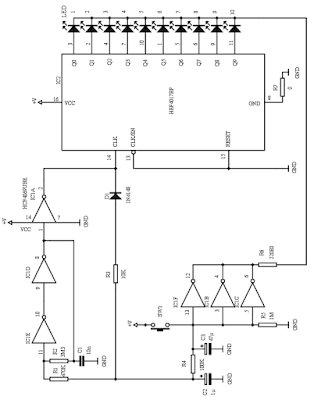 The biggest mystery to this kit are the two DIP chips included in the kit since they are, at a glance, little black boxes: 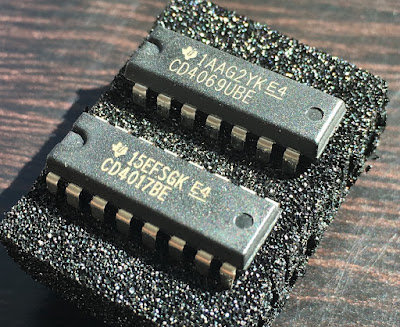 The MK152 kit documentation includes no mention of what they actually do, making it really difficult to figure out what the circuit does with only the contents of the kit.  However, Googling their part numbers brings up a wealth of information about these chips, and it turns out that these two DIPs are a set of inverters and a decade counter:
After understanding how these two ICs worked, building the kit's circuit on a breadboard seems a lot less daunting.  Because I only had long braided jumper wires though, my final product looked a bit ugly: 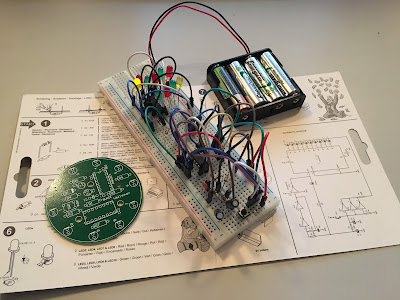 Not having any practical experience with electronics, I had a hard time understanding exactly how this circuit was working.  The CD4017BE IC is certainly central to this circuit's operation, and I understood that every time the voltage going into the CLK pin went up and back down, a new LED would light up.  I also understood that resistor-capacitor series have time-dependent behavior that can be used to make voltages go low and high in a very predictable manner, which could drive the CLK pin.  But how do these concepts translate into a wheel that spins, slows down, and eventually stops?

Aside from the CD4017BE decade counter, this circuit really has two distinct sections.  The first section handles the input: 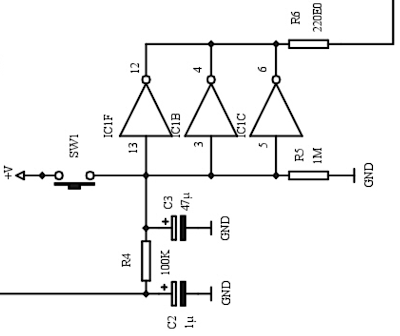 Pressing the switch (SW1) charges up the 47 µF capacitor (C3) and starts the roulette wheel going.  From here, I figured out that
The other half of the circuit is what drives the actual CLK signal that causes the LEDs to light up in order.  It effectively converts the analog signal coming from our RC series into a digital signal that drives the CD4017BE decade counter. 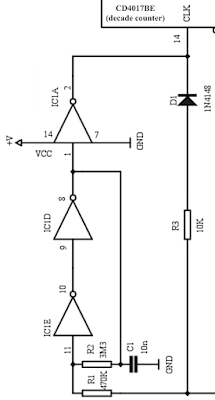 This was (and still is) a bit harder for me to figure out since the subtleties of how analog signals interact with digital components like the NOT gates aren't very clear to me.  That being said, I figured out that

As a fun exercise in both programming and understanding the digital aspects of this circuit, I then thought it would be fun to replace the CD4017BE decade counter IC with a Raspberry Pi.  This is admittedly a very silly thing to do--that is, replacing a simple IC with a full-blown microprocessor running Linux--but I wanted to see if I could replicate what I thought the CD4017BE chip was doing using the Raspberry Pi's GPIO pins and a bit of Python.

The basic idea is that each pin on the actual CD4017BE will map to a GPIO pin on the Raspberry Pi, and then a Python script will mimic the functionality of each CD4017BE pin.  Removing all the jumper wires that fed into the CD4017BE DIP and instead plugging them into GPIO headers on the Raspberry Pi was a little messy: 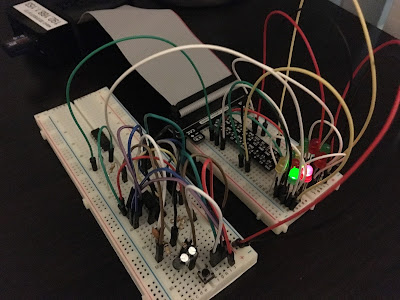 I also removed the battery pack that came with the MK152 and just powered the whole circuit off of the Raspberry Pi's 5V rail.  Then, each CD4017BE pin had to be mapped to a GPIO pin:
Because the logic performed by this decade counter chip is so simple, the Python code that implements the same logic is also quite simple.  Here's the minimum working code:

Since the Raspberry Pi only replaces the CD4017BE chip (and the battery pack), the physical button still has to be pressed to activate the circuit after the above Python script is started.  Once it's pressed though, the LED wheel works just like before!


This Python version of the decade counter logic doesn't have to stop here though; for example, I went on to implement the full CD4017BE chip in Python (including pins we don't use in this project like CARRY OUT and CLOCK INHIBIT) just for fun.  It would be trivial to also implement the CD4069UBE's NOT gates too and convert this kit into a real Frankenstein circuit.

This Velleman MK152 kit turned out to be a really fun project to start learning about both analog and digital circuitry.  Once I realized that IC datasheets are easily and freely found online nowadays, the idea of understanding the circuit became tractable.  This gave me a basis on which I could experiment; I could easily prod different segments with a multimeter, try to guess what would happen if I removed or replaced a component, then actually perform the experiment.  For example, I found that messing with the C2 and C3 capacitors changes how long and how quickly the roulette wheel spins, and sticking a passive piezo buzzer in parallel with the CLK signal adds roulette wheel-like sound effects too.

This kit is really a neat demonstration of a digital circuit using pretty simple analog and digital components.  What's more, it's a great boilerplate design for how analog components like resistors and capacitors can work with the Raspberry Pi.  The decade counter and inverter DIPs are also versatile components that can be used in other projects; this contrasts with many of the electronics kits that ship with a full microcontroller which, despite being able to perform more complex tasks, are truly black boxes.  Fortunately, the higher cost of microcontrollers actually makes these versatile kits cheaper, so they wind up being an economical way to build up a parts collection too.


If nothing else, messing with this kit along with my Raspberry Pi was a good excuse to get familiar with basic electronics and get in some practice programming GPIO.  Assembly and basic testing fit into an afternoon, but there is still plenty of opportunity to experiment and expand after that.
Posted by Glenn K. Lockwood at 11:34 PM